New Shortcut for iPhones Will Automatically Record Police Encounters – “Siri, I am getting pulled over”

Smart phones are becoming more useful than ever before. 2018 was a big year for Apple with new features that are helping consumers live a better life, and the future is looking even better with fresh new technology available for Apple’s smartphone users. A new feature that has Apple users buzzing is an app called Shortcuts. This app allows users to stitch several apps to create a chain that can be activated by pressing a button, or even Siri.

Robert Peterson of Arizona has developed a useful shortcut that will help save lives, and save money when it comes to the law. This one is called, Police, and it monitors encounters with police officers for you to have record of what happens.

Upon installing the shortcut and configuring it, all the user has to do is to say, “Hey Siri, I am getting pulled over.” The program will pause music, turn down the screen brightness, and activates the “do not disturb” mode. It will send a text to a selected contact, like a relative, significant other, or even a friend, to inform them that you’re being pulled over. The recording quickly begins by using the front-facing camera on the iPhone. When the recording stops, the file can be sent via email or text to the same, or different, contact and saved to Dropbox.

Peterson, the app’s developer, seems to believe that this could be a civilian equivalent to the police body cams. “It seemed to me that if you’re getting pulled over, it couldn’t hurt to have a recording of the incident,” Peterson states.

This shortcut is not only useful for helping people record their encounters with the men in blue, but it can also help in other potentially dangerous situations for individuals. For example, a female could use this shortcut to help them with a stalking issue with a nasty breakup between their significant other so they can quickly send their location to a family member if something happens.

The beauty of this useful app is that users can edit a previously designed shortcut to fit specific needs. You don’t need to be a programmer to create your own shortcut. If recording police encounters are top priority for using Shortcuts, the entire breakdown can be accessed within the Shortcuts app.

If you’re interested in making your own shortcuts, Petersen has some advice.

“The platform has a lot of potential, and if you read the Apple user guides and consult with others on forums, or just look at how other people’s shortcuts work and ‘reverse engineer’ them to your own needs, you can learn a lot quickly,” he said.

You can download the Police shortcut here. Make sure you have the Shortcuts app installed.

The new trend is here with the foldable phones. Apple Inc just officially received new patents to be able to create these new phones. This patent gives apple the chance to make foldable iDevices. More in depth…the patent is directed to the electronic device having a display layer and a cover layer with a flexable region. We can only hope that apple will create a folding iPhone. 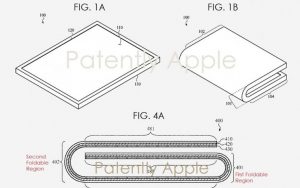 Samsung and Huawei have been paving the way with foldable phones with the Mate X and the Galaxy fold. There has been a few issues with the first foldable phone releases. Apple should be able to release a strong phone and catch up to its competitors quickly.